Rant Alert- The Haters Can Suck It 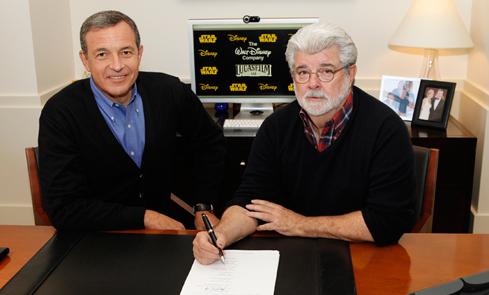 Okay, so I’ve talked quite a bit about Star Wars the past few days, but I have just one more rant on the subject before I give it a rest. I’m not a huge fan of the prequels. I don’t think too many people over the age of 25 are. That said, I’ve never ranted about how Lucas is only out for the money every time he does something Star Wars related. You hear it EVERY. TIME. “Another edition! Lucas is just fleecing the fans! He doesn’t care!” Few things here about why that statement is utterly stupid:

2. He doesn’t keep tinkering with the movies because he’s trying to charge people again, he does it because he honestly believes it makes the movies better and he can’t stop messing with his creation. Any creator understands this to a degree, because we all do it. There comes a point where you have to just step away and leave it alone. I think Lucas has finally gotten to that point, hence the sale and semi-retirement. That doesn’t make the changes good changes, but to him he thinks they are. Again, another reason why this sale is a good thing for fans.

3. He doesn’t really need more money, and I’ll prove that statement presently. If you think a couple extra million here or there is really the driving force behind Lucas’s decisions then you’re a moron. The man is one of the richest people in the world. Last time I checked, and I admit it has been a while, he was in the top 100 list, perhaps the top 50. He has billions of dollars. He and his kids are pretty much set for their lifetimes, and perhaps for his grandkid’s lifetimes too if they’re smart about how they handle the money and the economy doesn’t completely tank for good.

Now, to the “Lucas sold out! He’s selling our childhood and his creation for money!” crowd. Shut up. I’ll tell you why-  it was announced yesterday that Lucas, when the Disney deal is finalized, will be donating the money to charity. Specifically to help fund education. Four. Billion. Dollars. He’s not keeping a cent of it. The remainder that won’t be going towards charity is the stock in Disney. The rest is being used for philanthropy. I know, that selfish jerk. You can read the full article and the details here. I know there are still going to be a few jackasses that’ll manage to still say something snarky about this, but those people are morons and aren’t worth listening to. Just because you can share your opinion on the internet doesn’t always mean you should.  Yes, I am aware of the irony of that statement given that it’s exactly what I’m doing here, but it’s my blog and I’ll rant if I want to.

J.R. Broadwater is the author of the non-fiction book Down with the Thickness: Viewing the World From a Fat Guy’s Perspective, and the sci-fi detective novel You Only Die Twice, both available now in digital and paperback formats. Sample chapters and more information about both books can be found here.