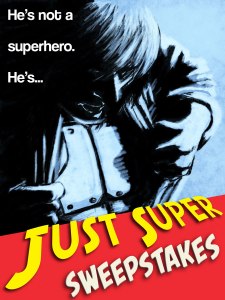 This summer is an awesome time to be a comic book nerd: Iron Man 3, Man of Steel, & The Wolverine in theaters. It’s especially exciting for long-time fans, as CBMs are finally being treated with legitimacy and respect, and as a result we’re getting much higher quality products. We’re in a comic book cinematic golden age, and it’s a beautiful thing. The subject of superheros isn’t as prevalent in fictional novels. There are a few floating around out there that are non-DC or Marvel novelizations, like the awesome Soon I Will Be Invincible, by Austin Grossman, but there aren’t many that get mainstream attention. I’ve been a huge comic book fan since I was a kid, and only got more hardcore as I got older and could afford to drop tons of money I should have been saving on trade paperbacks, floppies, games, and movies/TV shows based on my favorite characters. I wanted to do my own take on a superhero story, but one that might be a bit different than the typical mainstream take. Just Super is more about the people and relationships involved in being a “superhero,” and what the costs might be if someone were really to discover they had powers and wanted to put themselves out there, as opposed to being about beating up super villains in tights as they monologue.

To celebrate superheros and all the fun and entertainment that they bring we’re proud to present our very first contest here at Authentic Productions Entertainment: The Just Super Sweepstakes!

The Mission:  Take a photo of you doing your best super hero pose with either a paperback copy of Just Super, or a digital copy on your Kindle/Phone/Tablet opened to the title page of the book (so we know you aren’t cheating). Creativity counts!

The Countdown: All entries must be e-mailed to authenticwriters@gmail.com by May 3rd– the US release date for Iron Man 3.

The Rewards: Shawn and I will pick the top three entries and post them here on the site.

So there you have it! Have fun with it! If this goes well we’ll do another later in the year.